Tinnitus is a condition in which noise is perceived inside the head. The noise does not come from an external source.

The noise usually takes on the form of ringing, whistling, or buzzing. The most common form is a high-pitched ringing sound, but the noise can also be low-pitch in character.

Tinnitus can be frustrating to live with and there is no known cure, though most mild to moderate cases subside over time or return intermittently.

Fortunately, some recent research has given hope for better relief and possible cure through the use of binaural beats, a therapy that uses special sound frequencies to move the brain into different states.

Tinnitus can be caused by a number of things. It can last a short time, come and go in bouts, or become quite permanent depending on the severity of the condition.

The primary causes of tinnitus are:

All in the Brain

The strange thing about tinnitus is that even though it can be triggered by exposure to loud noises like heavy machinery or music, it’s not actually sound at all.

The noise isn’t in the ears, but instead is perceived by the auditory receptors in the brain.

Theoretically speaking, the noise exists in our minds where the default signal for silence should be. For some, this can make it almost impossible to rest or concentrate.

Where a person experiences hearing loss due to noise exposure, the noise can damage the cells responsible for hearing in our inner ears. The damage causes the cells to report to the brain that there is a sound, when there isn't, and thus we “hear” it.

Sound waves travel through the ear canal to the middle and inner ear, where hair cells in part of the cochlea help transform sound waves into electrical signals that then travel to the brain's auditory cortex via the auditory nerve. When hair cells are damaged — by loud noise or ototoxic drugs, for example — the circuits in the brain don't receive the signals they're expecting. This stimulates abnormal activity in the neurons, which results in the illusion of sound, or tinnitus (1).

As a former DJ, I have experienced bouts of tinnitus due to over exposure to loud music. It's common among musicians, many of whom go onto suffer for their reckless youth in later life.

On the advice of others, I started wearing specially designed ear plugs to clubs and festivals to reduce my exposure and avoid hearing damage. The Musicians Hearing Health Scheme actually offers a discount on specially made earplugs.

It's so frustrating to hear a sound in your head that no one else can hear. You want to be able to snap out of it, but you have to wait for it to go away of its own accord.

Fortunately, a study has revealed that binaural beats can help reduce and potentially cure tinnitus in some cases.

Currently the Tinnitus Association recommends medication, counseling, and relaxation therapy as coping mechanisms and potential cures, but also alternatives such as white noise generators or listening to a ticking clock or a fan in motion (2).

The purpose of the latter is to reduce the perception of tinnitus through masking. This may also result in residual inhibition – less noticeable tinnitus for a short time after the sound is turned off.

Sounds like fans, white noise, and rainfall also distract the brain and shift its focus to a different sound frequency. And it's this theory that led to the discovery of using binaural beats to address tinnitus.

The hypnotic properties and sound of binaural beats mask tinnitus in the same way as listening to white noise or a ticking clock. But they have an additional benefit, too.

Binaural beats can shift the brain state from feeling anxious, stressed and distracted to being deeply relaxed and focussed.

The human brain has a tendency to replace its dominant electrical response frequency and mimic or copy the frequency of an external stimulus, encouraging brainwave adjustment, balance and relaxation. Using the principle of “frequency following response,” the brain reproduces the frequency it receives via auditory or visual stimulation, leading to the desired change, i.e., relaxation (3).

The study recruited 26 patients, all suffering from subjective tinnitus. The average age was 48, and the average duration of tinnitus before treatment was 4.5 years.

Before the study began, the subjects were evaluated on a scale of 1-7 for severity of the condition. They then used the binaural beats program at home for up to 6 hours a day for 3 months.

At the end of the 3-month period, the subjects were re-evaluated. Researchers found a reduction in the degree of tinnitus disturbance in all 26 patients. The mean disturbance rating was reduced from 5.81 to 3.06.

We believe this modality is very effective because it positively affects both habituation to reaction by its relaxing effect and the habituation to perception as a partial masker. This dual effect can be achieved because the BWE auditory stimulation is very pleasant to listen to. That enables it to provide a daily stimulation as partial masking used by TRT modality and to produce an extra relaxation effect when incorporated in the other auditory cognitive relaxation techniques.

The results were published in the Hearing Journal. 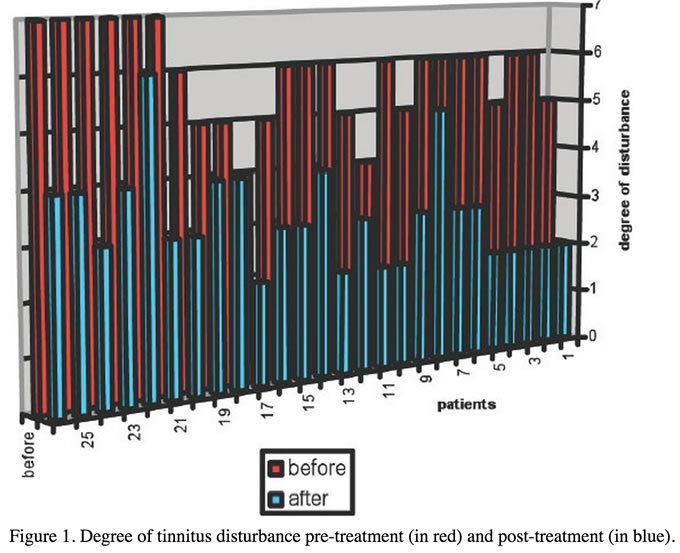 This research is promising and brings a positive new treatment tool to the table. It also has the capacity to combine an existing therapy, in the form of nature sounds that help mask and reduce the perception of tinnitus.

This dual approach is more powerful than any single therapy approach such as CBT or sitting down and listening to a clock tick.

It comes with two versions: tropical rainfall, and ocean waves. Each version is provided in a 30-minute and 1-hour version.

Theta waves are laid underneath the natural soundscape to evoke relaxation. The natural ambience works to reduce the disturbance level of tinnitus while the binaural beats lead the brain away from it's current high frequency state to a lower, deeply relaxed frequency.

You can try samples of Tinnitus Relief here.

Why Theta Waves for Tinnitus?

In the study discussed above, Alpha waves were used to entrain the brain and trigger the desired ‘Frequency Following Response'.

However, our research shows us that Theta waves, which is the next state down on the spectrum, is more desirable for treating tinnitus.

When you are stressed out by tinnitus, you are most likely producing an abundance of high frequency Beta waves. So if you were to listen to a binaural beats Beta waves track it may exacerbate your symptoms.

Members of the tinnitus forum, who trusted in amateur binaural beats videos on YouTube, have reported this. These made their symptoms worse (4).

Note that producers of such videos are not experts in this field. They may have no idea how to create the track in a way that will help lower tinnitus symptoms.

Alpha is below Beta, but in the upper spectrum may still cause you to focus too intently on the perceived noise in your head. This makes sense since Alpha waves are associated with relaxed focus.

In the lower spectrum, Alpha is still very useful for addressing tinnitus. But we understand that many sufferers have high anxiety and stress levels and, in this instance, are likely to benefit more from Theta waves.

With no official cure, the knock-on effects of tinnitus can be stress, anxiety, and insomnia, and in some cases depression.

It can be a debilitating condition in which a person ironically suffers in silence.

Characterized by a perception of a ringing, buzzing, or whirling noise in the ears, it impacts mood, lifestyle and relationships.

Binaural beats can be an effective therapy for the reduction of tinnitus symptoms. Regular use may provide a cure for some, though research is still in its infancy.

However, what this treatment does offer is a more powerful approach than traditional methods. And an alternative approach to medication that is affordable for most people.