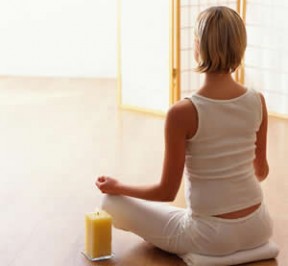 How to Meditate Properly in 6 Easy Steps

Meditation isn't supposed to be hard. Sure, it is can be a courageous act of surrender and submission, but it's also liberating and cleansing. Not to mention slightly addictive.

Considering all the benefits that one can take from meditating regularly, no matter how brief, it would be a shame not to try make it a habit.

Habits, though, require certain resources and preparations to remain. Below are some of the tricks that fellow meditators often do in order to maintain the habit. And even if you don't end up with a  meditation habit, these are tricks are worth keeping as daily habits.

A) Preparing the outer environment

Designated meditation rooms are usually designed and furnished minimally. The reason for this neatness is that a uniform surrounding helps the mind focus better. Even if the meditation is done in a tiny dorm room, it helps to clear the space and pick up the laundry from the floor.

Think of it this way, meditation is like momentarily relinquish control over things outside. And this would be so much easier done when these tasks are cleared and the reminders for the things that need our immediate attention have been cleared.

It also helps if you have everything you need for your meditation ready and nearby. Bolster pillows, covers, timer and (if you're using a guided meditation) headphones and audio-player. I have a designated set that I use only for meditation. So even if the house is in shambles, I can still find everything I need to at least clear that part of the house: the mind.

b) Preparing the Self

Across the religions, the water element works as a cleansing agent. Actually, one of the signs of mental illness or depression is prolonged self-neglect. Whether a shower or facial wash, acts of self-hygiene can trigger the mind to slow down, turn inward and enter a meditative state.*

For starters, keep it small. A brief meditation takes less resolve than a long one. It takes a bit of strength and bravery to mindfully disregard the hustles and bustles of the world, both from the outside and within.

It doesn't matter how long you meditate, or the quality and type of your meditation. These are not what meditation is about. But a bit of resolve can take you a long way, even if you only sit between 5 to 20 minutes a day. If you don't feel the effect of those brief moments of calm immediately, you will feel them eventually throughout the day. So feed your resolve on that certainty, that you're replenishing your strength. Once you decide to sit, stay.

It is one of the surest facts of meditation: The mind wanders. It is just what the mind does, and it's okay. Because even the most fickle of minds will eventually remember to stop. And if your mind only stops for a few minutes throughout the meditation session, you have done your job.

The good news is that there is plenty of help here. One of the easiest ways to keep the mind from running a marathon of thoughts in your head is to give it anchor.

I feel like I'm cheating my way through meditation by making it easier like this, but sound and mantra works on calming  – if not halting – the wandering mind. Probably because sound and mantra and the auditory functions happen in the head (where meditation starts).

Either way, under the right kind of stimulus, the mind is hushed and rests itself on the comforts of the auditory and verbal messages it receives.

One of the reasons why the mind obeys auditory stimuli is because the brain tries to synchronize with the sound waves it receives. As fickle as the mind gets, the brain is still an engine that is 70% made of water, which vibrates and undulates and responds fluidly to external stimuli.

Since meditation is also cleansing process, mental dust and unpleasant things might also arise. This is part of the important aspects of meditation, that it brings forth whatever has been hidden under the subconscious rug, and it can be unnerving process without proper preparation and guidance.

If we are strong enough, fine, we could just observe and let go and move on with our meditation. But if for some reason the stuff that arise from under our subconscious are overwhelming, not only would the meditation crack, but also we might start reacting from these overwhelming subconscious dust.

The music, then, would ease the process of overcoming these distractions. Good meditation music gears the mind into a meditative state and keeps it anchored there. Great meditation music, on the other hand, would do exactly that plus deepening the meditation, and strengthening our relationship with the practice.

The timer went off, the music track ended, congratulations! You have ended a meditation session. Now before you run off and plan world domination, take a minute to rev up your mind. Wiggle your extremities.

Take deep breaths. Yawn expansively. Remember what I said about the mind's fluidity? Well after meditation, your mind would be stilled and cooled, and it will need a minute to thaw and start running again.

Except that once it does start running again, your mind would be running a little differently. A bit, let say, more efficient and clear, that it will make up for all the time you spent on cleaning it up during meditation. And then some.

When we eat, we don't feel full and satiated just from one bite. It takes a few repeated bites for the process to be called a meal.

The same idea goes with meditation. More important than duration of your meditation sessions is the repeated session. Set a routine hour and do it for a few days in a row and no sooner that you mind will begin demanding for it on its own. For example, on a certain hour of the day, my mind slows and nearly stills and then I would know that it has gotten into the habit of entering that meditative state at 2 pm every day.

And if the mind can be that obedient to routine, why can't it be trained to be still during meditation?

Load up gradually on a combination of these tips, and see which ones work for you best and easiest. Remember that each of us experiences a unique meditation, and that nobody is keeping score. Just be good to yourself.

I wish you a nice sit.

* On preparing for meditation

There are occasions when preparing for meditation loses its significance. Sometimes, when the world feels too chaotic and we lose track of ourselves and the things we need to do, a moment of hush becomes the only place to start rearranging the world and making it neat again. Please declutter with discretion.