Having read our ‘How it Works‘ page, you've probably got a good idea of how binaural beats work.

On that same page, there is also a sample that enables you to experience a test tone to feel the effect in real time using a pair of headphones.

On this page, however, we'll delve further into the history of binaural beats and how they were discovered, in particular looking at that landmark paper written by Dr Gerald Oster called Auditory Beats In The Brain.

Heinrich Wilhelm Dove was a Prussian physicist and meteorologist. Dove wrote over 300 papers, and helped launch the science of global climate study.

But the ironic thing is that arguably his least noted discovery was to become his most famous.

In 1839, Heinrich Wilhelm Dove discovered that illusory “beats” are perceived when pure tones of slightly different frequency are separately and simultaneously presented to each ear.

In layman's terms: when the brain hears two tones of different frequencies in each ear, simultaneously, it causes the brain to perceive a new tone (beats).

This tone (beat) is the mathematical difference between the two frequencies sent to the left and right ears. Dove didn't know that part at the time, though.

Instead, Dove's insight was to realise that for this process to occur, the perceived tone (beats) must exist solely within the auditory (hearing) system, specifically the part which processes binaural (e.g., “stereo”) sound.

How did he do this? Surely he didn't have headphones?

He had someone stand in a room.

On one side of the room he used a tuning fork that ran from the fork to the person's ear.

He then placed a tuning fork on the other side of the room and ran another tube to the person's other ear.

The person then perceived the difference between these frequencies as a combined sound/tone, or slow beat(s).

We now know this as a binaural beat. 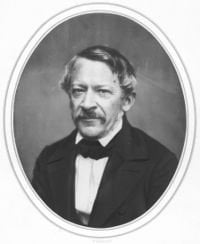 The theory would remain nothing more than a curiosity until 1973, when Dr Gerald Oster, a biophysicist, presented a paper in the Scientific American that sparked further research and interest.

There  is a lot of mis-information about Oster and binaural beats, mostly from people who haven't read the paper. It's important to note that Oster didn't cure anything with binaural beats or present research in that regard.

Oster viewed binaural beats as having both research value and as a potential diagnostic medical tool.

In terms of research, he saw the potential for binaural beats to explain features of the auditory system, not least how we locate sounds spatially in our environment and selectively single-out individual sounds from background noise.

For example, Oster found strong data that diminished ability to hear binaural beats was an early predictor for Parkinson's Disease.

He also found that variation in the ability to perceive binaural beats correlated subtly with where individuals were in hormonal cycles.

He found that people with certain neurological conditions, or at certain times of the month (women), vary in their ability to perceive and respond to binaural beats.

But central to his thesis, and what sparked further research into how binaural beats can help with focus, memory and pain, etc., was that binaural beats involved different neural pathways than conventional hearing, and they could evoke neural responses – even when both frequencies (to the left and right ears) are below the human hearing threshold.

The measurement of binaural beats can explain the processes by which sounds are located — a crucial aspect of perception. It is possible that hormonally induced physiological behavior changes may be made apparent by measuring the binaural-beat spectrum.

The Frequency Following Response (FFR) that binaural beats induce is not far fetched at all.  In fact, it is well established across many species. It is simply an evoked potential generated by periodic or nearly-periodic auditory stimuli.

Even the simple beating of a drum can induce the same Frequency Following Response, which is why a constant drum beat can be hypnotic – think tribal music.

But binaural beats appear to engage more neural circuits than conventional hearing. This science allows us to capture a specific frequency band and deliver it directly to our hearing system; enabling us to experience brainwave entrainment.

Music (sound) is made up of frequencies, which are vibrations. We are constantly being influenced by sound, be it the song of a bird, the seashore, or a song we like.

Sound has the power to influence, and the way it influences depends on the composition of frequencies involved.

The process behind the creation of binaural beats enables us to isolate particular frequencies that have been shown to positively influence the brain in a particular way.

And this, back in 1973, is what Oster was presenting a possible case for: that it could be possible to diagnose and address neurological problems using binaural beats/brainwave entrainment.

Auditory Beats In The Brain was the trigger for subsequent research into binaural beats and the potential to address problems such as stress and anxiety, insomnia, memory/cognitive decline, pain relief, and more.

You can purchase and read Dr Oster's paper in full by clicking here.

Alternatively, you can download a 10-minute free sample of one of our binaural beats for relaxation and stress release by clicking here.