While many can attest to the positive impact of music on their emotional wellbeing, the role of music as a therapeutic, healing and surgical tool is less understood and perhaps less accepted.

This is changing, though. Science is developing a deeper understanding of home certain types of music and specific frequencies, can aid wellbeing by reducing pain, anxiety, and even blood pressure.

Beyond this, certain sound technologies are aiding surgery and post-operation recovery.

In this article, we'll look at the evolving music healing landscape. Specifically, the most effective technologies, particularly in the area of pain relief, where so many people are reliant on drugs that decrease quality of life, and, in some cases, cause addiction issues.

The idea behind healing music can be traced back to ancient Greece. Ancient Greek philosophers understood that music could be used therapeutically.

This belief was put into practice when those suffering from manic episodes were treated with flute music, and those plagued with symptoms of depression were instructed to listen to dulcimer music.

Music was used to ease stress, promote sleep, and soothe pain, and even used to treat hangovers.

When Plato ascended to respect and power in Greek society, he too, lauded the effects of music, considering tunes to be “the medicine of the soul.”

He also stated that the harmony of music could positively (or negatively) impact ‘earthly souls.’

Throughout the ages, the ancients were said to treat a multitude of ailments with the healing tunes of music.

In fact, the Christian perspective on healing music predates Greece and goes back to Biblical times, when it is said that King Saul was cured of his pain and depressive symptoms by the harp music of David (1).

There are numerous cultural examples of music healing in ancient societies, most prominently the Native American Indian and African tribal use of music during traditional rituals, which they believed had healing properties.

The Middle Ages brought a new perspective, with St. Basil, who believed music an integral component of improving morality; and Cassiodorus, who saw music as cathartic.

This continued into the Renaissance period, with Italian music theorist Zarlino attesting to music’s ability to treat symptoms like pain, depression, and even the plague (2). 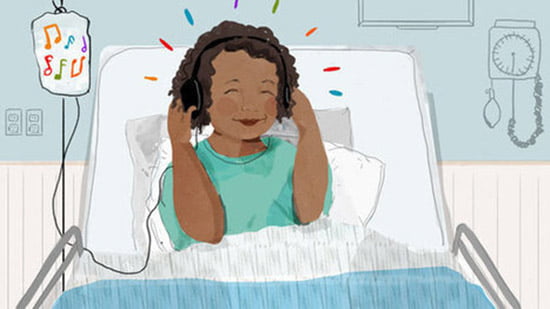 While many skeptics may dismiss the holistic approach of music for pain relief, due to the volume of scientific research on the subject the use of music to promote well-being is becoming an increasingly legitimate health tool.

Dr. Anthony Komaroff, of Harvard Medical School, has attested to music’s ability to improve patient’s mental function after strokes, to improve balance and coordination in patients and to alleviate high heart rate and blood pressure in heart attack survivors.

At Massachusetts General Hospital, a nurse-led team found that people with heart disease who were confined to bed and who listened to music for 30 minutes had lower blood pressure, slower heart rates, and less distress than those who didn't listen to music.

Another nurse-led team at the University of Wisconsin-Milwaukee found that heart attack survivors who listened to restful music in a quiet environment for just 20 minutes were less anxious about their health than those who rested in a quiet room without music.

The scientific literature shows that music plays an undeniable role in pain management, beyond personal testimonials.

For example, a study on cataract surgery showed that those who listened to Mozart sonatas music during their surgery needed sizably less sedative than those who did not.

The music listeners also had lower heart rates, blood pressure and less stress hormone (adrenaline and cytokine interleukin-6) present in their blood during the procedure.

Another study of patients undergoing urologic surgery with anesthesia determined that patients who listened to music during the procedure needed less supplementary intravenous anesthesia (4).

Music is relaxing, calming, and therapeutic. It is a stress reliever.

Indeed, A review by the international Cochrane Collaboration concluded that music therapy may help some people with depression to alleviate symptoms and remain healthy.

The research showed that people who participated in some type of music therapy reported a greater reduction of depressive symptoms than people who received other types of psychotherapy.

There is mounting evidence that listening to frequency-based music can enhance physical and mental wellbeing and help manage numerous problems such as pain, anxiety, high blood pressure and insomnia.

The music technology of binaural beats, specifically, has shown to be effective in pain management. 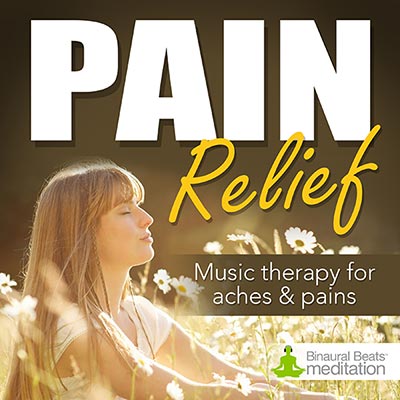 A study conducted in the United States exposed participants aged 26-69, plagued by chronic pain, to alternating binaural beat music for pain relief and placebo recordings for 20 minutes daily, over 14 days.

The results showed a 77% drop in reported pain after the listening session with the binaural beats (5).

A randomized placebo-controlled trial on male patients undergoing cystoscopy and ureteral stent removal found that “Listening to pure binaural beats may be a simple and effective method to reduce anxiety levels and pain scores associated with the DC and USR procedures in males (6).

The study was overwhelmingly conclusive: When compared to the sham stimulation, Binaural Beats reduced pain intensity, stress and analgesic use in chronic pain patients (7).

As you'll discover in our How It Works article, binaural beats occur when two different frequencies are played to the left and right ears through headphones.

This causes the brain to follow along at a third frequency, which equals the mathematical difference between the two frequencies sent to the left and the right ears.

The brain follows along at the resulting frequency, producing brainwaves in and around that frequency. This enables us to change the brain's state for more desirable outcomes, which can include improving mood, lowering anxiety and promoting healing, sleep, focus and more.

Since the times of the Ancient Greeks, the Renaissance period and societies such as the Native Indians, music healing (sound) has come full circle. From therapists to medical doctors, the power of sound is being realized.

There are numerous research studies showing the effectiveness of binaural beats music to reduce pre-operative anxiety, particularly in the field of dentistry, and to help in the management of pain, both post-operative and chronic.

But one team at St Mary’s Hospital in London have used sound waves in an extraordinary way – to complete a successful operation on a neurological imbalance inside a patient’s brain.

The team used a focused ultrasound (sound waves vibrating at frequencies too high for humans to hear) to destroy the faulty electrical brain circuits that were responsible for a shaking, shuddering tremor in the patient’s right hand.

The ultrasound waves were targeted at a high intensity, which generated enough energy and heat to destroy the cells of malfunctioning tissue.

Using sound waves to heal this problem avoids the need for an invasive surgical procedure, which can negatively impact patients during or after the operation.

Doctors say that the procedure could be a suitable treatment for the symptoms of Parkinson’s Disease, which include muscle slowness. It may also be a non-invasive alternative to treat brain tumors (7).

Music is a critical component of everyday life, and has been for thousands of years.

It can help us relax, meditate, go to sleep, or stimulate creativity, motivate, and help us focus.

Music is by all accounts a powerful influencer in human emotions, and can quickly and easily shift our mood.

But beyond this, science has proven that music is a healing agent for those who suffer from chronic pain, anxiety, high blood pressure, and depression.

Music technology, like the aforementioned binaural beats and ultrasound examples, are increasingly being used in cutting-edge medical treatments or as support for existing treatments.

The question shouldn't be “should you use music to aid wellbeing”? but rather “Why aren't you using music”?

Everyone can benefit, particularly experiencing bodily pain, tension, or discomfort, even anxiety or high blood pressure.

If you fall in to this category, you can start by trying one of our wellness audio downloads such as:

As Bob Marley famously said, “One good thing about music, when it hits you, you feel no pain.”

Marley’s wisdom, it seems, knew no limits – much like the near-magical capacity of music.