A hundred years ago, entering states of higher states of consciousness for healing, spirituality and peak mental performance was attained only by a few who practiced ancient techniques such as meditation, chanting and repetitive drumming.

These disciplines are all capable of producing the desired results, but they take long periods of practice, discipline and often a leap of faith, making it all too easy to give up after a few attempts.

In the modern day we have the luxury of brainwave entrainment, a natural science that uses special frequencies – such as binaural beats – to entrain the brain to a variety of states; for relaxation, learning, rebalancing of the chakras, better sleep, deep meditation and  heightened states of spirituality, etc.

The infographic below shows in simple terms how listening to frequencies in the spectrum of a particular brain wave band affects brain state.

As stipulated at the bottom of the graphic, during standard meditation practice, the brain will drop level by level, usually starting in Beta and then dropping down to the high Delta zone (bordering the sleep state) to achieve a completely still mental state.

The difference with listening to brainwave entrainment music (often referred to as brainwave meditation) is that frequencies of the a specific brain state are played repetitively and consistently, which in turn entrains the brain to fall into the desired state and remain there once the music has finished. 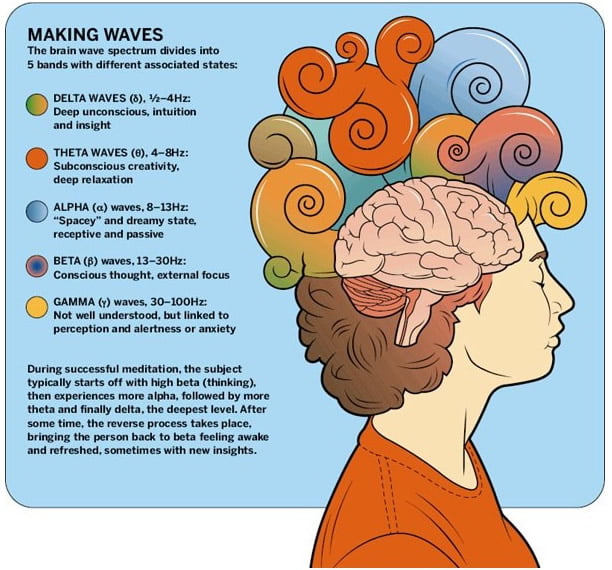 To display this infographic on your blog or website, simply copy and paste the following code into your website’s html editor and save it:

Brainwave Entrainment is any practice that aims to cause brainwave frequencies to fall into step with a periodic stimulus having a frequency corresponding to the intended brain-state (for example, to induce sleep), usually attempted with the use of specialized software.

The process depends upon a “frequency following” response on the assumption that the human brain has a tendency to change its dominant EEG frequency towards the frequency of a dominant external stimulus.

Such a stimulus is often aural, as in the case of binaural or monaural beats and isochronic tones, or else visual, as with a dreamachine, a combination of the two with a mind machine, or even electromagnetic radiation.

The Powerful Influence of Rhythm on the Brain

Drums have long been used in tribal settings to bring about higher states of consciousness to perform healing rituals and connect with mystical realms.

This all seemed a bit “woo-woo” until the the invention of the electroencephalograph (EEG ), which led Biofeedback researchers to discover that Theta brain waves oscillate at 4.5 beats, or cycles, per second.

This is in direct correlation with research carried out by Malinda Maxfield, PHD, who studied the Shamanic State of Consciousness, and found that the steady beat of a drum struck 4.5 times per second was the key to transporting a shaman into the deepest part of his spiritual consciousness.

The same theory is applied when studying the effects brought about by the rhythmic drone of Tibetan Buddhist chants, a practice that transports the monks and other participants into a realm of blissful meditation.

The gentle pulsating rhythms of binaural beats meditation programs work in a similar way, yet because the frequencies are precise and target they induce highly specific, desirable brain states.

For example, in the same way you can tune a radio dial to listen a particular station, using binaural beats audio you can re-tune your brain state – effectively allowing you to create a brain control panel that you can tweak to wide variety of brain states conducive to optimum health and wellbeing.

Although referred to as binaural beats, or a binaural beat, this form of brainwave entrainment actually sounds more like a pulse or vibrating frequency, but is actually two frequency signals interpreted by the brain as one constant, rhythmic sound.

The tone/pulse only begins to sound reminiscent of a beat when the frequency rate is slowed down and  the intermittent pulsating can be heard. It is then apparent how brainwave entrainment has such a hypnotic affect on the brain.

The process of entrainment occurs because of the “frequency response process”, which presents a similar theory as to how ancient tribes would have unknowingly been entranced upon hearing consistent tribal drumming.

Listen to the sample at this page: After 20 or so seconds, take one earphone off of your ear for a second and then put it back on.

Repeat this a few times and you'll hear how your brain interprets the distinctly separate tones coming in from each ear as one single, consistent, rhythmic tone.

Listen for a few minutes or more and your brain will begin to respond by producing brain waves at 4.5 Hertz; the same frequency it interprets as the mathematical difference between the two sound frequency signals coming in from the left and right ear phones.

You will feel a sense of relaxation as your brain falls into the Theta state, as documented in the brain state spectrum infographic earlier on in the post.