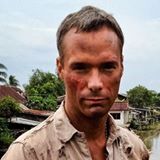 From motivational speakers to actors, politicians, athletes and salesmen, binaural beats are used the world over by people who work in roles where the ability to engage an audience is an essential skill.

In this guest post we hear from Herman Kluger, a model turned aspiring actor who came across binaural beats by chance, and began using one of our recordings to stop performance anxiety getting the better of him at castings.

I began my career doing modeling and commercials, but had always harbored aspirations of being an actor.

In the last six months I've landed a few smalls parts, with a few lines here and there, and recently I played a body double for another actor, which was cool but not quite what I wanted – I basically set up camera angles and had my hands, legs and back of my head used when he wasn't needed.

What I was finding was that getting past the first casting stage was fairly easy. I pretty much always got called back. But the second casting, when things start to get intense and I am required to meet the director and act on demand, etc, is when performance anxiety began getting the better of me.

I'd get the usual butterflies, but also the sweats and a feeling of tiredness, which really threw my concentration.

It's strange because I am a very confident person. I've had to be doing commercials and modeling jobs in the past, many of which have involved degrees of nudity.

It was frustrating me and I'd thought about anxiety pills – which many aspiring actors do use by the way (both herbal and prescription) – but to be honest I'm afraid that a pill might make me fall asleep in the waiting room!

Jokes aside this was eating me up a bit. It was limiting my potential to give my best. I'm not getting any younger and I knew if I wanted to land a decent job that would expand my portfolio I'd need to get over this performance anxiety before long.

As luck would have it I came across binaural beats by chance. Another actor at a casting walked in with his iPod on and didn't remove his headphones for ages, which I thought was a bit rude, at first.

When he did I said, “What you listening to? You seemed really into it.” He then explained that he was using a recording called Creativity Boost to give him ideas for a monologue he was writing for another casting later that afternoon.

We got chatting about meditation and ways to focus and lose the nerves. He explained what binaural beats were and how they'd helped him in many ways with his acting work. He explained that he used them to improve his memory. relax and to promote confidence. I was intrigued.

And so I bought the BBM Anxiety Release recording, which has worked wonders for me. At first I was worried that it might make me too relaxed and I'd forget my lines, or worse still appear like I was stoned. But no, the recording puts me in the zone man.

I feel relaxed and confident. No more sweats and yawns with that horrible lethargic feeling. I begin using the recording an hour before my castings, listening all the way to the venue, and if I am on my own in the waiting room I'll leave my headphones on right up until the last minute.

I am happy to say I have been called back a third time for a main role in a German movie. It shoots for one month and is worth a fair bit of money.

The fact that I made it down to the final few for such a big part is testament to being able to compose myself  better and perform at my best all the way through the casting process.

I recommend binaural beats to anyone who struggles with performance anxiety that prevents them performing to their full potential, whether acting, public speaking or sports or musical performance.

I have since bought other binaural beats to assist with other areas of my life, and can say without a doubt I am hooked!

Herman Kluger is an aspiring actor from Germany.